One of the more common questions out there is about swim training. Why is it so different than bike and run training? As a swimmer, you don’t question it. It’s just the way it is and what you’ve done your entire life. But triathletes love to question stuff, so it forces a better explanation than “because I said so”.

For those of you who do train all three sports the same, and therefore not understanding, you should know that you’re doing it wrong. Swimming workouts are built on intervals. The whole workout. From warm up to warm down, nearly everything is based on a repeat of some sort. So to understand better, here are some reasons it’s done that way.

1. Intervals force pace
In cycling or running, we go for a ride/run and we usually focus on consistency, often through speed, heart rate, power, or pace. For swimming though, you don’t have those devices, but what you do have is a clock, which is the most important tool at the pool. One of the big problems with swimming that you don’t have in the other sports is a such a heavy reliance on technique. As you fatigue in the pool, your technique begins to change or slowly fall apart, and this will rapidly slow your pace in the pool, even if the effort feels the same. So unlike land sports, steady effort doesn’t always equal steady pace. So breaking up a long swim into shorter distances with minimal rest helps us maintain consistent paces.

If a person swims 2,000 yards straight, you will typically see that he swims faster and with good form for about 200 yards, and then the person begins to slow down until he either hits some rock bottom pace or finishes the swim. When the person goes back to determine the average pace, it’s really deceiving because without that speedy beginning, he has no chance at holding that average pace. So he heads on over to his first Ironman with a goal time that is ridiculously out of reach.

Now if you take that same person and change the workout to 20X100’s with a short 5 or 10 second rest, that person will still probably go out a little quicker in the first couple of 100’s, but then that person will manage the effort and pace better as he is seeing each and every 100 time, regrouping, adjusting and repeating. By the end of the set, the person will be able to see and discount the faster first 100’s and better understand a pace he can hold. Beyond that, a person with a goal pace can try and hold those times to see if the goal is realistic.

That sounds rather vague, but it’s often the premise of most every workout. Build sets, negative splitting a set, adjusting the intervals to better mimic the race–itÍs all a factor of understanding and forcing a pace that a straight swim of a similar effort can’t achieve.

In the triathlon world, constant intervals are sometimes a hard pill to swallow, and I still see and hear athletes and coaches prescribing straight swims in the pool. So just to put it in perspective for you, I’ve been swimming competitively since the late ’70’s, through college and as a pro triathlete. If I had a nickel for every 1 hour straight swim I’ve done, I’D BE BROKE. Yep. Never done it, because it has no value. If your coach is giving you a bunch of straight swims, you need to look in another direction.

2. Intervals force technique
As mentioned earlier, one of the big problems in swimming is that when fatigue degrades your technique even a little, your performance will drop dramatically. This is another great reason to avoid the straight swims. In the pool, it’s perfect practice that makes perfect. So, if we take that same 2,000 yards, if your stroke starts to fall apart after a few hundred, then you are practicing bad form for the majority of the set. Break it back out to 20X100, and it does two things for you: (a) it allows you to see that your performance is slipping, and (b) it gives you just enough rest that your muscles can recoup and perform the stroke correctly again. A healthy heart can completely circulate the blood in about 23 beats. Given a 10 second rest and a reasonable effort, you will give the muscles a refresh each time.

From my own personal experience, in preparation for an upcoming race, I was doing a set of 15X100’s on a tight interval (meaning just a few seconds rest). The first 5 felt pretty good, but then I started feeling my stroke fall apart by the last 25 of each hundred as I continued the set. Those few seconds on the wall allowed the arms just enough time to start the next 100 with good form again that would last a little more than a 50. This continued until the end. By contrast, the next day I did a 1,000 and after the 500 I watched each 100 split get slower and slower as the form fell apart, and I wasn’t able to regroup.

3. Intervals force focus
This is more of a subset of technique, but it deserves it’s own discussion. This is also usually where the tools come in. Hand paddles, fins, kickboards, etc. Doing shorter repeats allows you to focus on a certain aspect of the stroke. Tools such as hand paddles and pull buoys allow you to isolate the pull, just like certain drills allow you to do the same. By putting all the stress on a single aspect of a stroke, muscle failure is likely to happen at a much faster rate. So rest and allow it to recover fully before repeating the process. Just throwing on the hand paddles for an entire workout will certainly fatigue the muscles, but instead of just losing form, that additional stress may cause injury. This is just one of the reasons tools and (some drills) are to be used sparingly.

Intervals also allow you to build on the aspect you are focused on, or better apply it to a normal stroke. For example, 25’s where #1 is kick and body position, #2 is adding a single arm pull, and #3 is normal swimming. Same as paddles and buoy, then just buoy, then no tools. The progression teaches you how to apply good form to a normal stroke.

Now these aren’t all the reasons for using constant intervals in the pool, but they are a good start. The more you swim this way, the more you will appreciate and understand the reasons. If however, you still have doubts, then just do it because I said so. Happy training.

TJ Fry has been racing triathlons since 1986. He swam at Clemson University, is a former professional triathlete and 8 X Ironman (3 Kona). He currently coaches and owns South Coast Endurance. You can find out more information about TJ and his coaching services at www.southcoastendurance.com.

The Importance (and Joy) of Keeping a Running Log 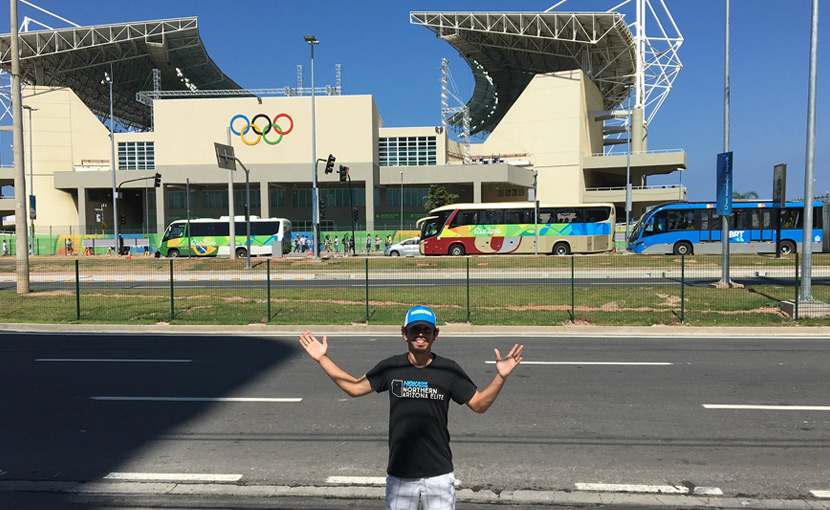 What I learned from our U.S. Medalists

You are what you influence.